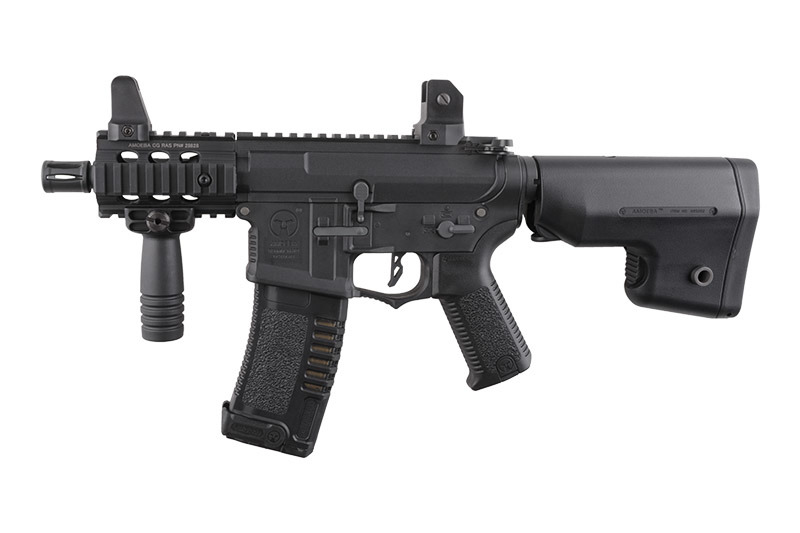 A series of the latest Amoeba Airsoft replicas is based on a well-known design of AR type assault rifles, however these replicas have been considerably modified and enriched of many constructional details and interesting technical solutions, which improve not only their functionality but also their look.

The replica”s receiver was made of strengthened nylon. Quality of the materials used results in the fact that it is very difficult to recognise on the first sight whether it”s plastic or metal. Effective signs of a model, calibre and Amoeba Airsoft”s logo were engraved on the receiver. Metal was used to produced the outer barrel, the front-sight, the flash hider, the stock tube and some small pieces. The pistol grip, properly shaped, covered with scrabrous non-slip texture which improves grip and comfort. The magazine release button was enlarged in order to make its usage easier.

The replica was equipped with a telescopic regulated SF type stock, which allows to adjust its length to individual preferences of a shooter. The battery can be placed inside the stock and tube. The stock has a two-side QD suspension socket. Access to a hop-up system regulation is achieved in a standard for this design way – by pulling the charging handle and opening tjhe shell ejector.

The all-purpose 22mm RIS rails are situated on the front grip and on the top of the receiver, thanks to which the replica may be fitted with a wide range of additional accessories, from a scope to lighting and tactical grips. The rifle has iron sights mounted on the RIS rail. A vertical front grip goes together with the replica.

The outer barrel ends with a 14mm right-hand thread on which the flash hider was mounted.

EFCS considerably increases the mechanism”s life span and the whole replica as well and it allows to use high-voltage batteries, including LiPo. If we buy an outer dedicated EFCS programmer, we may receive a possibily to select fire modes as well as the burst mode (a three BBs series).

A magazine included in the set is a plastic hi-cap of the capacity of 300 BBs. The magazine is covered with scrabrous non-slip texture, it also has a folding pull-mag type grip.

Be the first to review “AM-007 carbine replica” Cancel reply