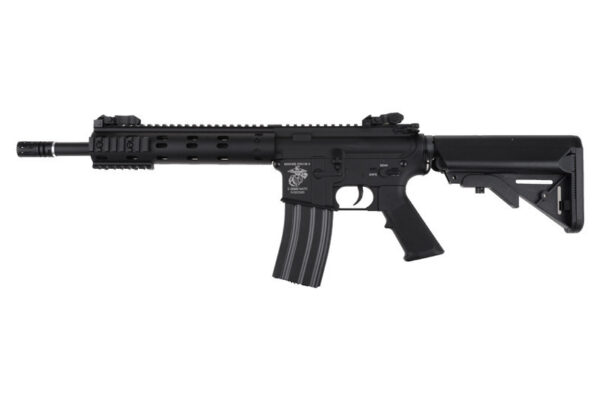 The Specna Arms brand SA-A08 carbine replica made predominantly of an homogenous alloy of zinc and aluminum with the use of steel elements in the most neuralgic points of the replica ( the screws, the pins and the tactical sling attachment points are made of steel ). The SF type stock which holds the battery and the pistol grip were made of polymer plastic. The replica’s body, the RIS rail set were a subject to the process of anodizing what guaranties a high level of protecting the replica against corrosion. The paintjob of the replica itself was made using the pulverization method after a previous sandblasting of the replica’s surface. This ensures the paint’s higher, than usually, durability against abrasion. The replica’s body beads the USMC markings.

The gearbox which is reinforced on the height of the cylinder’s head hides a steel main spring guide which is the element of the Enter & Convert™ system and also8mm ball bearings and steel thread-wheels which are placed on spacers. The system is secured with the use of four anti-reversals. The light, polycarbonate piston is equipped with a steel tooth in order to increase its durability. There is a type 2 cylinder and the steel breaker and a metal hop-up chamber applied in this replica.

Be the first to review “SA-A08 Carbine Replica” Cancel reply