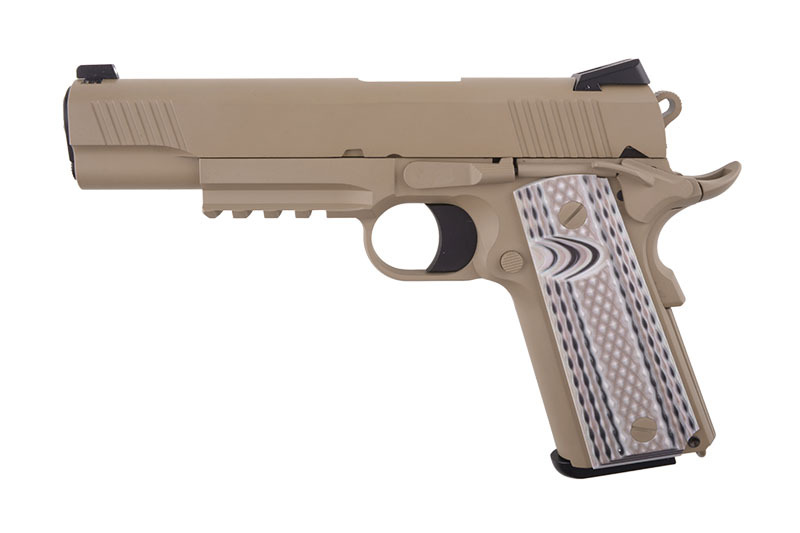 The 1911 M45A1 pistol replica by WE was made with the utmost attention to detail. The slide, frame and gun magazine were all made of metal, with only the grip covers being made out of plastic. The covers are removable and have a comfortable non-slip texture. The quality of finish and the general make of all the replica”s elements can be seen and felt immediately after taking the replica in hand. The materials used make its weight similar to that of the original.

The security features are fully functional and work just like in the original, real steel gun – the first one is the grip safety lever on the back of the handle, which allows the shot to be fired only when the gun is held in hand, the other is a wing safety lock on the slide. Under the barrel, 22mm RIS mounting rails are attached, which allows for attachment of a variety of additional accessories, such as tactical lighting or laser target markers.

Thanks to the powerful blow-back system, it was was also possible to make the gun”s operation very closely resemble that of the real steel equivalent – the system puts the slide in motion with each shot, and stays in the rearward [psition after emptying the magazine. This results in a great recoil effect of the replica and greatly enhances the realism and pleasure of operating the pistol.

The replica is supplied with a metal magazine which can hold up to 15 BBs. The magazine also holds the tank for the gun”s propellant.

– the replica
– a magazine