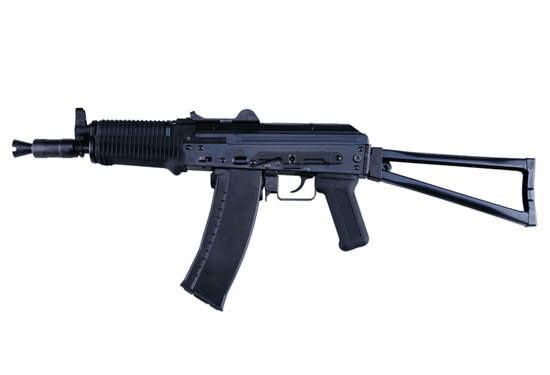 The 74 UN model which is
made of steel and durable plastic by the WE company represents with itself a
perfect level of copying the replica. The replica was made with highest
attention to detail and the replication of the original firearm. The used
blow-back system operates very “hard” just like it befits a replica of this
type, therefore, guaranteeing increased realism, both for the shooter as also
the observers. This is without any doubt the biggest advantage of this model.
It is felt best whenever using the replica in the full-automatic firing mode.

Additionally, another portion
of realism is obtained by the new system introduced by the manufacturer – the
so called Open Bolt or the Open chamber. The WE replicas that are equipped with
this solution do not have the brass insert in the bolt carrier chamber and
which was present in the first models made by this company.

The magazine that is included with the set holds 50 BB pellets. It is attached
to the replica is a way more similar to the original than in the case of the
AEG replicas. The replica is powered
with Green-gas. The green gas tank is located in the magazine while as the
input valve is discretely hidden in the magazine’s base. The adjustable stock
ensures a greater maneuverability in tight rooms than the typical wooden stock
that is used in the similar models.

The manufacturer used a few interesting solutions in the replica that improve
the old construction. The first one is the interesting magazine well in the
magazine nest, which facilitates and shortens the magazine reload time. The
second on is the platform on the firing mode selector lever that facilitates
its use with the index finger of the right hand. This shortens the time of
securing the replica. The last of the improvements is a special carving on the
firing mode selector lever allowing to hold the bolt carrier in the backwards
position. This shortens the reload time of the replica and prevents it from an
accidental shot by blocking the bolt carrier. After shooting the last BB pellet
the bolt carrier remains in the backwards position.

The replica is adapted to be powered with a
stronger gas than green-gas – CO2.

The
WE 74 UN is a perfect choice for anyone interested in a GBB system replica and
for those who are fan of the Russian technical thought.

– the replica,
– a magazine