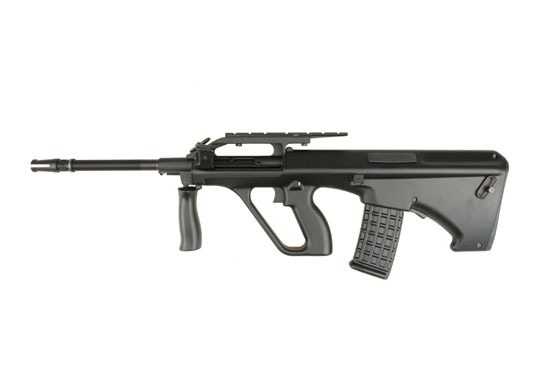 JG0448A carbine replica
Firearms in the bull-pup system (sometimes referred to as stockless) have a long tradition and an equal amount of enthusiast as well as skeptics. One of the advantages of this construction can be hardly ignored – it is the possibility of implementation of a really long and effective barrel, whilst maintaining relatively compact size of the firearm. It is important to note the aesthetic value as well – bull-pup firearms are simply unique and they cannot me mistaken with anything else.

Similarly to the live firearm, the receiver of the replica was made from durable polymer. It is partially covered with rough, anti-slip texture, which improves grip stability. Metal parts include: the entire front of the replica with the external barrel, RIS module and miscellaneous elements such as the shell ejection window plate or flash hider.

The rear part of the replica features a tactical sling swivel for the attachment of a QD (quick detach) tactical sling. Access to the hop-up adjustment knob is gained in a traditional way – after pulling back the charging handle and uncovering the shell ejection window. The handle can be locked in rear position. The flash hider sits on a 14 mm left handed thread.

The battery of the replica is stored inside the stock (if one can use such a word in the case of a stockless design). In order to access the battery, one needs to remove the rubber stock pad. No tools are necessary for that operation because it is attached by being pressed into its place. Disassembly of the entire replica into two parts also lasts mere seconds. It is necessary to access the Hop-Up chamber and internal barrel. In order to do that, it is necessary to press a metal pin – a lock – and afterwards split away the construction into 2 parts – the receiver and front part with the scope and barrel.

The mechanism itself was based on the V3 gearbox. Tightness, quality of used parts and how well parts fit together decides about good performance and long lifetime of the replica. A long, 510 mm long internal barrel makes this replica suitable for combat on long range. At the same time, the replica is barely 780 mm long, which makes it a very compact tool that can be easily used during CQB scenarios, indoors, inside vehicles, etc.

The replica comes with a polymer Hi-Cap magazine with a capacity of up to 300 BBs.

– the replica
– a magazine
– a battery
– a charger
– a cleaning rod

Be the first to review “JG0448A carbine replica” Cancel reply